After months of training and hard work, it was finally time for finals weekend!

It all started on Friday 30th March 2019 when unfortunately having come down with an ear infection, I wasn’t sure I would be able to go to the morning training session, but I managed to go a bit later than everyone else.

When I walked through the door, the girls on the team all ran towards me and we had a group hug. Then, I felt happy as I knew they all had my back.

After our training session, we all got on the coach, which was late and we travelled down to Birmingham. The A Guard girls all ran to the back of the coach but I think the Junior team got the best seats at the front.

Firstly on the coach, we looked through everyone’s food bags for the best snacks then filled our time doing loads of Tick Tocks! 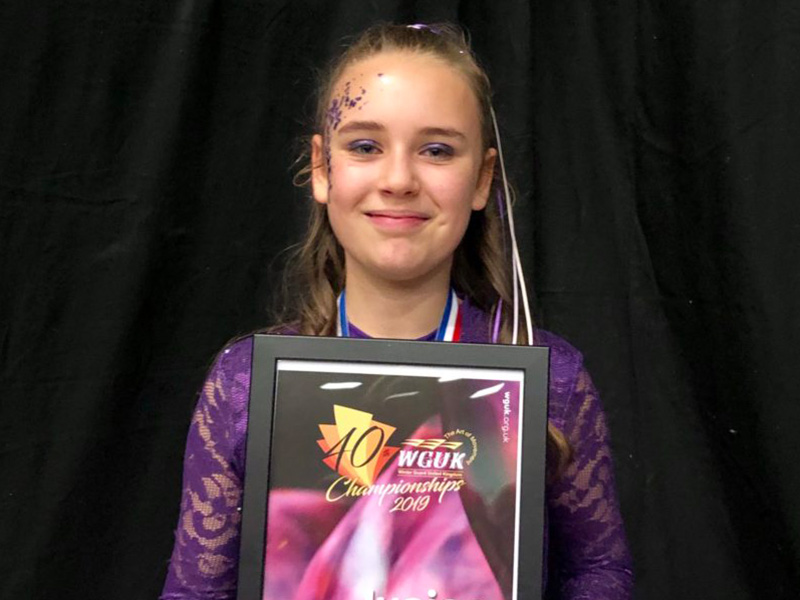 After a few hours on the coach, we arrived in Birmingham. There was much excitement about who gets which room.

Later, we went out for tea to Pizza Hut and met up with most of the other girls from the Junior team which was fun.

Now it was time for a good night’s sleep before the BIG DAY!

Saturday was up, breakfast and off to Worcester. When we arrived at the arena, we all got off the coach and partnered up with a cadet and headed inside to find our changing rooms.

We then had time to watch some of the other Guards perform, including our A Guard – this was good to watch, before getting changed into our uniforms and having help to do our hair and make-up.

We then went down to warm up where we did 9 minutes body work and 9 minutes equipment.

Finally, it was time for prelims. I was the N word but I was excited.

Everyone cheered and screamed because we ‘smashed it’. When it was over, I ran off because I thought I was going to be sick. Then we had a group talk. Tony said “well done” and that he was proud of us all.

Thankfully, we now had time to go to McDonalds – I was starving. Luckily we got back in time to watch our Cadets perform. They were amazing and came 3rd place.

After another interval, it was finally time for our 2nd performance. Daisy from the A Guard said if I managed to catch my 360 throw again she would stand up and cheer. Once again we grabbed our flags and went back to warm up. When 18 minutes were over we went to the arena to perform our show for the last time. I felt emotional but amazing because I knew we were all going to try our best. My 360 throw was coming up and when I caught it I cried! During our show we could hear the crowd clapping and cheering.

We then got to watch the A Guard perform again before it was time for retreat and the long awaited results.

They played “The Final Countdown” as we walked out onto the arena. I was at the front with Izzy who was carrying the big star. We all waited nervously for the results and then we found out we had come second place – SILVER medal winners!

After many photos later and lots of celebrating, it was finally time to head back home after an amazing weekend.

Where abouts in Halifax are the dance classes?

Dance classes are held at the Savage Hall, Eastgate, Elland, Halifax. HX5 9DQ. We are in an old Methodist church next door to Morrison’s pedestrian entrance. There’s a side street you will see a car park and then the entrance to our building.

Who to ask about dance classes?

You can find us on Facebook ‘Anchormen Dance Teams‘. Or you can email us at info@anchormen.org.uk.

Every child is different. We try to encourage the new member to jump in straight away and try out a few dance warm ups. We make sure they have fun at their first dance class. Also, the first dance class is free of charge.